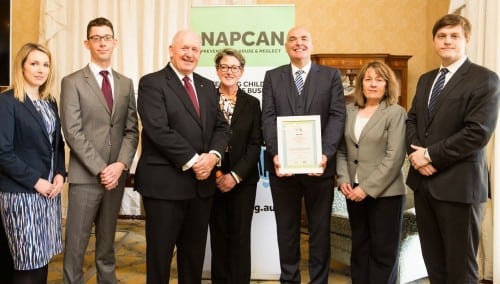 The National Children’s and Youth Law Centre’s collaboration with a law firm, Australian business, the University of New South Wales and the Commonwealth Government provides the only free legal service dedicated to children, young people and their advocates in Australia.

The collaboration won a 2015 NAPCAN National Play Your Part Award for its work in leading reform in Children’s Law, hosting Lawmail and the website Lawstuff which provides information ranging from cyber and school bullying to forced child marriage, family violence, criminal law and discrimination at work.

In the words of clients: ‘to provide such concise advice in such a short period of time for no cost is something nowhere else to be found in the world.’

“It makes it easy for young people like myself who were in deep s… to get some good, free legal advice”.

The 2012 Law and Justice Foundation of New South Wales’ Legal Australia-Wide (LAW) survey found that four in ten, 15 to 17 year-olds in Australia will experience at least one legal problem a year. Of those, 20% will report stress-related illnesses, 19% physical ill-health and financial strain in 29%.

The director of the Centre, Matthew Keeley said that if any part of the collaboration wasn’t there the service couldn’t function.

“Without the University of New South Wales there would be no office or infrastructure to work from and without the financial support of the Commonwealth Attorney-General’s Department and law firm King & Wood Mallesons there would be no Lawstuff, which is accessed by over 1 million people a year,” he said.

“Without the pro bono legal assistance of King & Wood Mallesons, Telstra, and the Australian Securities & Investments Commission, the Centre would not have been able to grow to support over 2,200 young people through Lawmail these past 12 months.”

The National Children’s and Youth Law Centre is a national centre of excellence which was instrumental in changing the Victorian laws so that no longer can children be charged for taking naked photos of themselves under child pornography laws. The reform also makes it easier for young victims of ‘revenge pornography’ to seek help.

“We strongly believe that national law reform relating to sexting is needed.

“We are also researching a national body of work around the impact that a criminal record has on young people, especially in later life.

“We’re advocating for new laws so that young adults are protected in the same way that children now are with the Enhancing Online Safety for Children Act.”

The centre was the leading NGO contributor to the Enhancing Online Safety for Children Act, 2015 (Cth), which established a Children’s e-Safety Commissioner to resolve cyberbullying complaints and a system of take-down notices to remove bullying content from the internet.

Ms Ahram Choi, the acting principal solicitor of the Centre said that they have seen an increase in cyber bullying and sexting inquiries.

“Cyber bullying, online defamation, sexting, school discipline, expulsions and suspensions, bullying, leaving home, renting, entering into contracts and age of consent laws are some of the common subjects which children and young people seek advice about,” she said.

In 2014 Lawmail clients came from across Australia: 18% from inner regional, 9% from outer regional, 6% from very remote Australia and 5% of the clients identified as Aboriginal or Torres Strait Islander. The Centre’s capacity to serve disadvantaged youth who often find geographical distance a barrier to legal services is significant, especially as according to the Listen to Children 2011 Child Rights NGO Report, jointly authored by the Centre, Aboriginal children aged 10–17 are 24 times more likely to be jailed than non-Aboriginal children.

In 2014, the collaboration helped one in four of all 10 – 17 year-olds that requested advice from community legal centres across Australia (of which there are almost 200). Of all the clients that provided feedback, 91% responded that the Centre’s advice and referrals were very useful or useful.

The Centre also co-convenes the Child Rights Taskforce, Australia’s peak child rights body, which advocates for the protection of child rights in Australia.

The Centre employs four permanent staff, including a lawyer on secondment from King & Wood Mallesons, 20 on-site volunteers and around 200 volunteers working remotely from collaborating organisations.

Mr Keeley said that the positive feedback the Centre receives from children and young people provides the continuing motivation behind much of the collaborators’ work, however more help is needed.

“We are in desperate need of more funding. In the last four years the number of young people that we help directly has nearly tripled yet our staffing has remained the same,” he said.