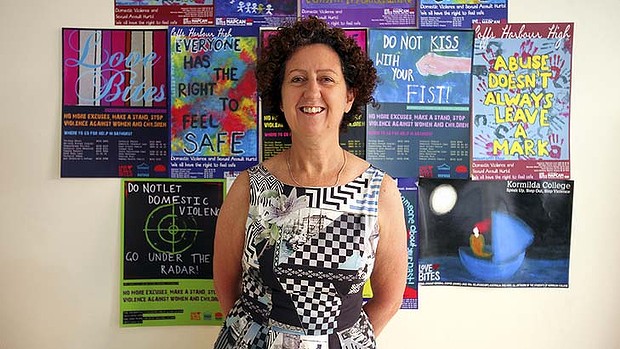 Teens take a stand against violence

A girl goes to a party at a mate’s house, gets drunk, goes to the bathroom and lies down in a stupor in the empty bathtub. A boy then follows her into the room and has sex with her where she lies. She blacks out and wakes to find him gone. Did he have consent for that act?

Immediately after this scenario is relayed to a group of high school students, the hushed room explodes into animated conversation.

”She shouldn’t have behaved like that,” exclaims 15-year-old Ellen* indignantly, her neat ponytail bobbing as she shakes her head. ”She should have taken responsibility.”

Michael*, 14 – perhaps surprisingly – disagrees completely. ”But he should never have taken advantage of that situation,” he says. ”That was wrong, wrong, wrong.”

The spirited debate in the clusters of 14-, 15- and 16-year-old students who’ve just been shown a DVD surges on, with some voices raised and others softly murmuring. Was the girl at fault, or the boy? Who was really to blame?

After 20 minutes, the 30 youngsters sitting in a common room at a school in Sydney’s south come up with their verdict: No, she was drunk and wasn’t capable of giving consent. The boy had no right to force himself on her; it was sexual assault.

The adult in charge of this session, Maureen Moran, smiles. This is the answer she was hoping for.

”A lot of young people believe that assault and violence is a normal part of a relationship,” she says later. ”They may have learned that from their own family dynamics or from their friends or from TV and films and Facebook. We know they’ve maybe not had conversations like this before about violence, and are often confused. So it’s great to get them thinking about these issues, and talking.

”It’s a very powerful way of starting to effect generational change in people’s attitudes in society.”

These young people are taking part in a revolutionary day-long program that’s been rolled out into schools, youth centres and juvenile justice facilities in 120 communities across NSW, Queensland, the Northern Territory and Western Australia, and is just about to be exported into Victoria and South Australia.

Called Love Bites, it’s a prevention program for domestic and family violence and sexual assault, designed and run by the National Association for Prevention of Child Abuse and Neglect (NAPCAN), and applauded by teachers, police and community workers alike. There are also associated programs for younger children, All Children Being Safe for four- to eight-year-olds, and Growing Respect, teaching seven- to 12-year-olds about respectful relationships.

The programs are becoming phenomenally popular among those who’ve experienced them, and have been recognised as so innovative, they have attracted funding from as far away as Switzerland. Canadian experts are now studying them, New Zealand has asked for a training program and Thailand is now running one in a number of its primary schools, and planning a major roll-out into many more.

In Australia, child abuse, assault and neglect have been constantly in the headlines over the past two years, from harrowing inquiries into child sexual abuse in various states and rows about a lack of child protection workers in NSW and Victoria, to the latest Australian Institute of Health and Welfare figures showing a 6.6 per cent rise in the national number of notifications of suspected child abuse and neglect on the previous year.

This month, a major study conducted by the Australian National University, Children, Communities and Social Capital, revealed that many children don’t feel safe in their community, are fearful and distrustful of strangers, are frightened of car-related aggression and violence, and feel vulnerable and scared when people are drinking alcohol.

In addition, a recent Fairfax Media investigation found that domestic violence is responsible for three-quarters of the deaths of women in NSW, and two in five of all homicides and assaults in NSW.

But amid all the misery, these new proactive programs to make young people aware of how to protect themselves and help prevent abuse – and to change their own attitudes to violence in the hope they won’t ever become assailants themselves – are providing real hope for the future.

At Engadine High School, for instance, where Extra watched its first Love Bites sessions, there was an assembly for year 10, 11 and 12 students that same week. The newly elected male school captain Kyle Richardson took the stage and invited all the boys and male staff in the audience to stand up and, with him, take the White Ribbon oath to end male violence against women.

Sitting in the front row of the audience, deputy principal Paul Owens felt a moment of panic. ”None of us knew he was going to do that, and my immediate reaction was, ‘Oh my god! What if no one stands?”’ he says. ”There was a moment of absolute silence. And then I could hear movement behind me and all the males in the audience rose as one. It brought tears to so many people’s eyes to see that happen.”

The next week, a group of 13-, 14- and 15-year-old girls came to his office and shyly asked to come in. Then, they told him about a friend they were worried about who was experiencing domestic violence. ”That was so heart-warming to see,” says Owens. ”One of the key parts of the program is about not staying silent on violence and pretend it’s not happening, so it was wonderful to have these students taking that message on board, and whereas once they might have let it slide, they were now taking action because, as the program teaches us, that’s what mates do.”

It’s those kind of results that have heartened those who’ve designed Love Bites.

Maureen Moran was a former school director and social worker anguished at never having enough resources to manage the growing number of cases of at-risk kids. She then collaborated with Women’s Health on the mid-north coast of NSW, and created the program in a bid to try to stem the tide of domestic violence and relationship abuse in the area, to develop and extend it. The pair were joined at NAPCAN by Leesa Waters to help implement and train more people to run the courses.

Waters had despaired, after 20 years in child protection, of the lack of inroads the system was making. It came to a head when she saw a father in a courtroom whose children were being taken away from him. Twenty years before, she’d been the one to recommend he be taken into care. She could see for herself the relentless cycle of family violence continuing unabated.

”It was so depressing to think I’d invested my life in trying to help children, yet it didn’t seem to be making a difference,” she says. ”The violence and child abuse was intergenerational. By the time we became involved, the damage had already been done. I felt there had to be an alternative.

”So these programs have the capacity to get in early and help empower young people, support them and educate them about what’s OK and what’s not. You watch young people going through these programs and the light bulbs go on; they might understand what’s happening in their own families isn’t right, and are able to seek assistance. They have hope. And it also allows all the various agencies to collaborate and work together to achieve successful outcomes in the future.”

Love Bites involves kids watching films about both domestic and family violence and sexual assault, talking about the issues, and taking part in a number of exercises to define what’s acceptable and what’s not. They also hear some of the shocking statistics of violence in Australia: nearly two-thirds of women reporting experiencing at least one incident of physical or sexual violence (Australian Institute of Criminology National Survey); violence against women as the leading contributor to death, disability and illness in Victorian women aged 15-44 (Vic Health); alcohol and drugs being a factor in 48.5 per cent of assaults (Bureau of Statistics); one in three young people experiencing physical violence in personal relationships (ABS).

Another session has them voting Fact or Crap on a number of statements, including the idea that violence is merely part of being a man, alcohol is the only cause of violence, and whether some women provoke men into hitting them. The message being hammered home is straightforward: Violence is always a choice – and it’s a bad one.

In the Northern Territory, where some communities have a very high level of intergenerational violence, senior project officer Ellen Poyner has seen first-hand the changes that can come about. One young man saw a film shown about a party in which a number of girls end up being assaulted, and approached her later.

”If I hadn’t seen that and talked about it, I wouldn’t have thought twice about doing some of that same disrespectful stuff,” he told her. ”But there’s no way I’d do that now!”

She was heartened. ”It’s very easy in a community that has a lot of violence to become focused just on supporting victims,” she says. ”But prevention is such a new field in Australia, and it’s amazing to be having these kinds of conversations with people and getting such great feedback about how confident young people can now feel about what’s a healthy relationship and what’s not.”

The young people on the program end the day by developing a piece of artwork or performance about what they’ve learned. The results have ranged from rap songs to poetry to posters. The images and messages can be both shocking, and liberating. ”Dumbestic Violence – It’s not smart,” reads one; ”We don’t dress for sex, we dress to impress” and ‘Hands Up, speak out against domestic violence”, read others.

”Working in violence prevention is about working in hope rather than despair,” says Bonnie Souter, who in her work at a women’s refuge in country NSW has taken the program to the refuge, schools and young offender centres. ”The day is all about the young people’s views and ideas being challenged, and they go straight in with honesty and sincerity. The program’s always been a success.

”They want to be good boyfriends and girlfriends, they want respectful relationships, and the program empowers them and enables them to … become the next generation of leaders.”

More than 92 per cent of 2500 comments so far say the teens have learnt something from the program.

For Michael and Ellen, their Love Bites day feels like a game-changer. ”It was good to get important things clear and help you decide where you stand,” says Michael. And for Ellen: ”I learnt a lot about sexual assault and the impact it can have,” she says.

Michael and Ellen’s names have been changed to protect their identities.

There were moments during the Love Bites day when 16-year-old schoolgirl Maddie Kemlo felt quite emotional. Seeing the real-life story of a young woman who was beaten almost to death by her boyfriend, then the DVD of a party scenario where girls are abused, and following up with discussions of the issues with her schoolmates, was confronting at times.

”But it was really eye-opening,” says Maddie, a student at Engadine High School. ”I knew issues like domestic violence and sexual assault occurred but I had no idea how prevalent they are in society, especially for young people.

”It was upsetting, but we need to know about these things and both girls and boys need to understand our rights and responsibilities.”

Maddie lives in a very happy home, but she now knows the signs to look out for if things ever to go wrong for her in a relationship, so she’d feel confident about getting out of any situation that didn’t feel right. If anything happened, she also knows who to go to.

”They also showed us how to help other people who might be having problems,” she says.

”I think the program was very, very valuable for us.”