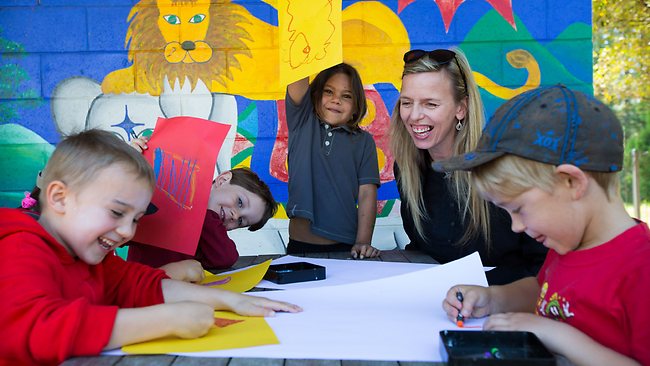 NAPCAN’s Angela Walsh with Bowraville preschoolers. The preschool receives support from UBS Optimus Foundation which ensures children are safe and ready for their future.

Article by Damon Kitney printed in The Weekend Australian, September 21, 2013:

There, some of the nation’s most powerful bankers wine and dine the elite of corporate Australia with five-star cuisine and do deals that transform the business world.

They are a world away from the tiny town of Bowraville.

The picturesque community in the NSW mid-north coast hinterland, midway between Coffs Harbour and Kempsey, may have a pretty main street with its grand old pub, restored stone courthouse building and a fine chocolates shop.

Yet the pleasant facade has long masked a deep darkness. Bowraville has been renowned in official statistics as the fourth most poverty-stricken town in NSW, where vandalism and alcohol and substance abuse are rife in the community. The town also was the site of the Bowraville murders, a series of killings between 1990 and 1991, when three local Aboriginal children were abducted and murdered.

The initials UBS mean nothing to most of the locals or those in the Aboriginal mission on the outskirts of the town.

But at the local Central School and preschool, they now represent a lifeline.

The UBS Optimus Foundation is the little-known philanthropic arm of the global investment bank. It is a charitable grant-making foundation funded by its clients and dedicated to ensuring children around the world are healthy, safe and ready for their future.

For many years, in true Swiss-style, it has quietly flown under the radar.

It first had links with Australia in 2006 when UBS partnered with the National Association for Prevention of Child Abuse and Neglect in its Kids Can National Awards, awarding a $25,000 grant for the Love Bites program that educates young people on sex, consent, power and control in the relationships.

Two years later UBS Optimus forged a partnership with NAPCAN to protect children from violence and sexual abuse, including backing the Growing Respect and Respectful Relationships programs that work alongside communities to strengthen their capacity to support children and young people to have healthy and respectful relationships.

The children at Bowraville preschool and the town’s Central School are now part of those programs, which have extended to 130 sites across Australia

Forty per cent of the children at the Bowraville preschool are indigenous.

To NAPCAN’s general manager of programming, evaluation and growing respect, Angela Walsh, the support and the impact it is having has meant some are now giving Bowraville a new name: “Bowradice”.

“It has been very easy for us to work with both the pre-school and the school because Bowraville is such a partnership community and people do work together because it is the right thing to do. In relation to the “Respectful Relationships” program, we have always had a vision it should start in pre-school.

“If you can have consistent language from kinder through schooling, you have the building blocks of respectful relationships.”

The school’s principal, Malcolm Mcfarlane, says he is confident the program is changing Bowraville from the town a Nine Network 60 Minutes documentary described in 2009 as the place young people were desperate to leave. “Like any community there is a limit to what improvement will be created organically here. But the families are involved now. My belief is that when you have families understanding what is happening within the school and they know that they are a part of that, it is not a case of the children talking about just school talk. It is reinforcement and it feeds off itself,” he says.

Jackie Bradshaw, a director at the pre-school who has worked there for three years and watched it double in size over the past two, says the funding from UBS Optimus — through NAPCAN — has been vital. “The backing is essential because you are constantly looking for your next grant to be able to continue to build on to your program.”

She claims the fact the program is engaging the whole community means it will be successful.

NAPCAN has also been backed previously by the CAGES Foundation, a philanthropic group set up in 2009 by the Salteri family to fund initiatives that work with Aboriginal and Torres Strait Islander families both at home and in pre-school spheres.

“We came in with the surety of knowing NAPCAN had the partnership with UBS and that it had been through the Optimus evaluation process,” said the foundation’s executive officer Rachel Kerry, who was formerly with Perpetual.

UBS Australia separately supports a range of philanthropic programs including a five-year partnership with the Nura Gili Centre for Indigenous Programs at the University of NSW.

But the NAPCAN-UBS Optimus partnership, now worth more than $1.5 million over six years, forms part of a major Asia-Pacific push by the bank’s philanthropic arm: 45 of the 127 projects it supports globally are in Asia.

In May, Optimus opened a regional office in Hong Kong to spearhead and expand its operations in the Asia-Pacific, using it to nurture interest from Asian families seeking philanthropic opportunities that focus on improving the lives and the potential of children.

“We’ve been looking at Hong Kong for a long time. Hong Kong has had enormous wealth growth and we are finding that a huge part of what clients are asking for, they are very interested in this issue,” says Zurich-based Optimus chief executive Phyllis Costanza.

“In particular, the awareness of social issues is very high, because people in Asia are living with an enormous wealth divide. They see poverty everyday.”

She says right now is an exciting time to be in the China region because the philanthropic landscape is changing dramatically.

“The older generation is still doing traditional philanthropy — giving back to the communities they grew up in and focusing on charities. But the younger generation want to take a much more business-like approach to philanthropy — not only philanthropy in general but funding social entrepreneurs,” Costanza says.

She says the younger generation in families is more international in their outlook and prepared to fund a wider array of things.

“Not just tools like social entrepreneurs, but other areas not necessarily in their communities, like job generation, the environment. And they are keen to know whether their money is going to have an impact.”

But rather than dividing families, she says the changes are uniting them.

“Often parents come to us and say, ‘I really want to get my child engaged in something we can do as a family’. So they have their son or daughter work directly with the Optimus Foundation to develop a project together,” Costanza says.

“It is fascinating the way it is used as a way to help engage the next generation.”

Earlier this year researchers at the Queensland Institute of Medical Research, the University of Queensland and Hunan Institute of Parasitic Diseases received 1.5 million Swiss francs from Optimus to expand their “Magic Glasses” education campaign into rural China. The program centres on a cartoon DVD promoting hygiene, featuring a small child who puts on “magic glasses” that can suddenly see worm eggs and larvae in bright colours.

Optimus is now looking at options for partners in mainland China and in Singapore.

It is also working with NAPCAN on a partnership in Thailand with the long-established Mercy Centre, which works to help the children and communities in the slums of Bangkok.

Optimus has funded an innovation project for 12 months, which is creating a child protection curriculum and programming for primary and preschools in the bustling Thai capital.

Angela Walsh believes it is only the beginning of what is to come in the region. “Historically Optimus ran out of Zurich. It was very Zurich-centric. But Optimus have now set up their office in Hong Kong. And I think there will be stronger regional links,” she says.

“I would hope that we will start to build those relationships across Southeast Asia. They are keen to take the work we are doing in Bangkok to Cambodia and other countries.”

See article at the Weekend Australian